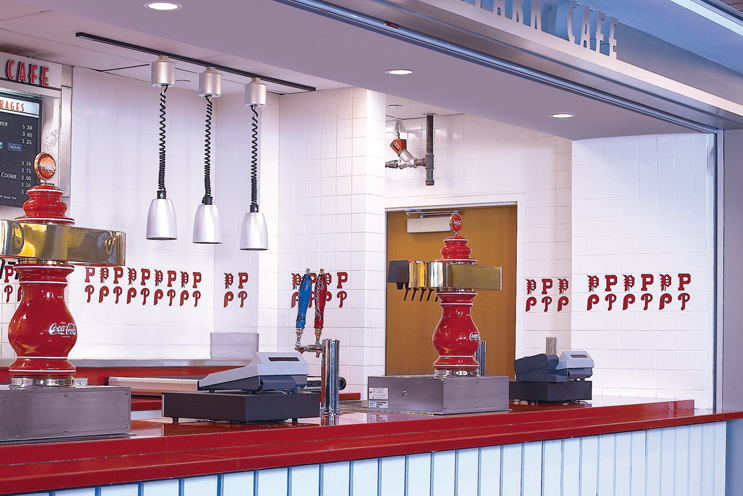 The new Philadelphia Phillies stadium, Citizens Bank Park, opened to rave reviews in April 2004. Phillies’ management teamed up with Ewing Cole to create an unrivaled environment for fans to enjoy games in. The design team creatively used custom surfacing materials manufactured by Imagine Tile in order to create a space that mimicked the newly installed natural grass playing field. Although Imagine Tile offers a variety of nature themed tiles, which includes a grass pattern, the designers tasked Imagine Tile to come up with a design that appeared more like a ballpark field instead of grass typical of residential yards. A professional level grass baseball field in the Middle Atlantic growing zone was scouted, photographed, and translated onto the tile which was installed in all of the restrooms on the Club level premium seating area. Imagine Tile’s custom ceramic tile design capabilities were also utilized to create the four different “P” logos spanning the history of the Phillies franchise. The detailed logos were incorporated in a series of tiles that became an accent strip on the walls of the club level concession stands.